My WIP today is Lara by Debbie Bliss using Jo Sharp Silkroad Aran Tweed. I think I cast this on over a year ago and knitted the first sleeve and that was it. So I have pulled it out and am going to try to finish it, but the rows are so long that it seems like it will take forever. At least there will be hardly any seaming when I do finish knitting. 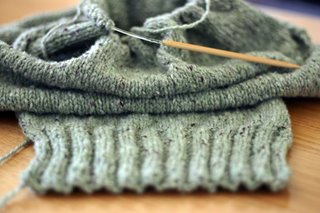 I've have had stuff cut out and sitting in little piles for weeks. I am slowly working throught the piles - new ones do keep mysteriously appearing though. If I'm quite honest my new craft room looks like its exploded, I can't see the bed or the floor.
Thank goodness Chris just rang to day he doesn't have to umpire footy tomorrow, so I might make a start on cleaning. But if I clean I can never find anything in here. I know I have a complete double standard I could never stand having anything like this mess anywhere else in the house.
Here is what I have finished. A sheep, definetely looks like he's a bit surprised or he's just leaving a rave party. 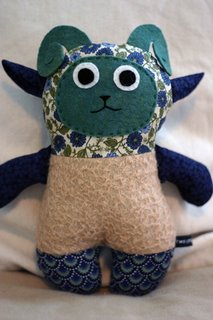 I finally made some minimoopys for the girls from scraps of cotton and corduroy. This is a pattern from here that Carly kindly shared. It is a great pattern and a great size for little people. 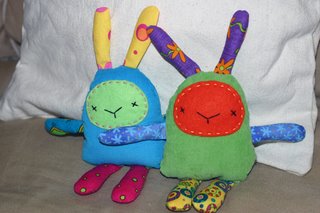 It's raining again today. It is so nice to have some rain and to know that a lot of farmers are finally getting some, but it means another day stuck inside and wet washing draped around the house.
We had a day like this on Monday and I really needed to get to the shops. We finally made it later in the day, but as soon as we got there it started raining again and by the time I got the girls back into the car it was pouring. And then the car wouldn't start - the battery was really dead. I think the girls knew I wanted to scream so they did it for me. Lucky school had finished so Chris and a friend came to the rescue.
I finally got around to making some hair clips. The big ones on the right for me and the little ones for the girls - they match some pants I made for them. We'll see if they stay in their hair for more than 30 seconds. 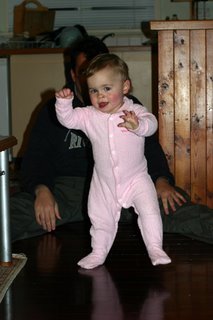 Posted by Kate at 9:41 AM No comments: Links to this post

create your own visited countries map
Posted by Kate at 2:34 PM No comments: Links to this post

We have been out enjoying the last of the school holidays, going to lunch and seeing people. not much sewing being done.
A couple of milestones for the girls today. Grace tried to walk and managed a bit of a shuffle and Amelia stood by herself. Grace quacked at a dog yesterday and then quacked for the rest of the day.
Some more of my favourite books. ISBN 4579111001. Great children's clothes. 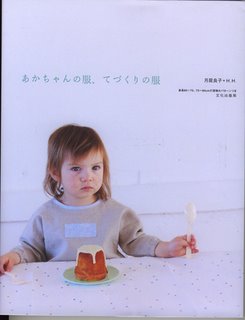 ISBN 4277311512 - Gorgeous smocking and it doesn't look too tricky. More pictures from them can be found here. 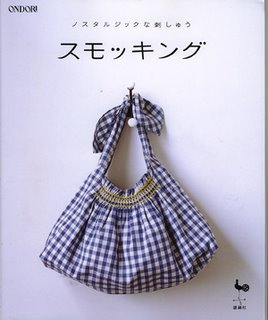 My WIP this Friday is my room. It is meant to be the spare room, but also had the computer, all our books, another television. I have a craft desk in the laundry, but have never used it - way too cold out there. I do everything at the kitchen table. Yesterday Chris decided I needed to shift some furniture so we can actually use the kitchen table to eat on.
Here are a few pictures of how the spare room looks now. There is still a bit of work to do, but it is going to be great to leave the sewing machine out all the time. 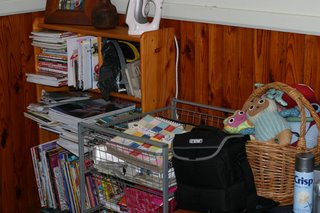 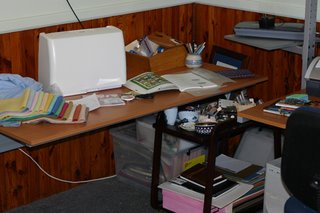 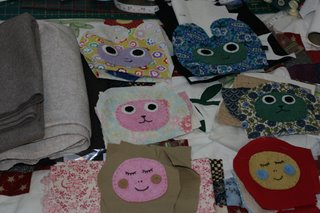 I have oftened admired the banner over at Soozs and all the softies she makes from felt. A while ago she wrote about her 'felt dealer' (this stuff is definitely like a drug!) and I just received my first parcel from them. I say first as I know there will definitely be more! 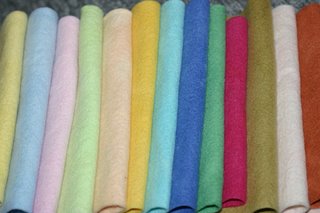 We are back from another trip around the countryside. We went to Perth for the weekend to see Chris's family and celebrate David's 60th birthday. The girls held up pretty well at the party considering that there were a lot of new faces for them there.
After Perth we headed to the farm to Mum and Dad's for a few days. My sister Jane and her husband came too which was great.
A couple of pics from the trip. Nanna Jean and Amelia. 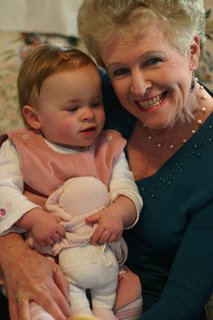 Chris and Grace. Grace had to be pushed all the way to the car after the party. 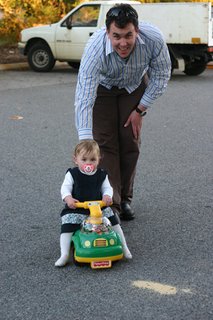 Cupcakes for playgroup today. These may look pretty basic compared to the cupcakes here and here, but this was a big effort for me. Lucky I had Mum and my sister Jane to look after the girls, otherwise they would never have been made. 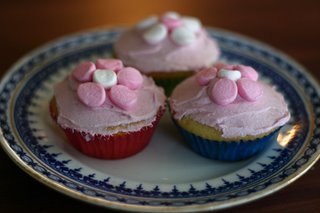 A couple of pictures from a lovely Japanese Craft Book - my current favourite one.
It is called Linen Handiworks for Everyday Use. The ISBN is 4834724034. 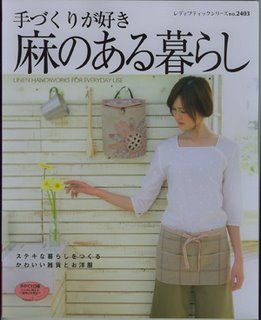 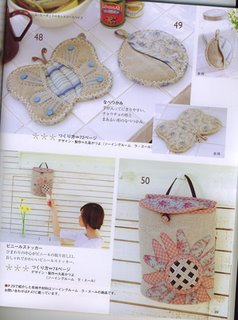 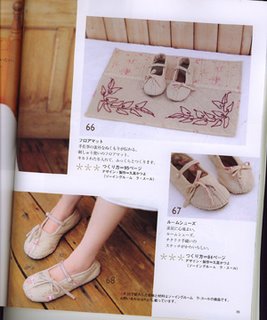 With Chris being on holidays this week and the girls growing I have needed to make some more clothes for them. I've used a lot of corduroy. Corduroy used to make me cringe. I think it reminds me of bad 70's flairs in ugly colours, but it is the best thing for kids clothes. Easy to sew and easy to wash. So we have pants. Green for Grace and aqua/blue for Amelia. 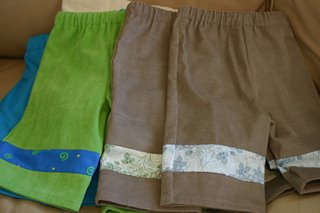 Dresses for Grandad's special birthday party this weekend. I actually cut into my stash of Liberty print - it did take some courage. 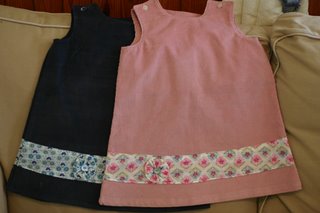 I am pretty proud of the little flowers I made. 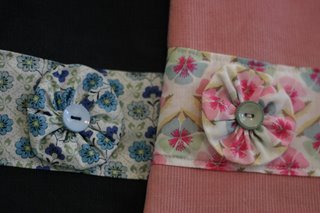 I find it hard somedays working out how to dress them - will they need counselling if I dress them the same or will they grow up needing to be dressed the same as some twins I've talked to did. I still feel the need to have two things pretty similar even if they don't wear them at the same time. It started when I was pregnant. We didn't buy much until they were born, but if we did there had to be two.
I think it was a superstitious thing - if we bought two then we would have two healthy babies at the end. Mum bought a "Happy Child" rose when I was pregnant and became so paranoid that she had to buy another one the next day. The strange thing is one has always been smaller and grown a bit differently then the other.
We have all been stuck in here for a few days with colds and Amelia has had gastro. The sun has appeared and it actually looks warm outside I am hoping it is and we can go outside to play.
Posted by Kate at 10:24 AM 4 comments: Links to this post

I have finally finished a pair of socks for Mum. 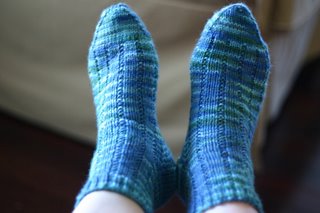 The details:
Pattern - Thuja
Yarn - Lorna's Laces Shepherd Worsted in Icehouse (this stuff is seriously soft and fantastic to wear)
Needles - 3.75mm
Posted by Kate at 4:03 PM No comments: Links to this post

The girls are growing which means they need some new clothes. So here is my WIP for today - piles of fabric which will eventually become clothes for Grace and Amelia. 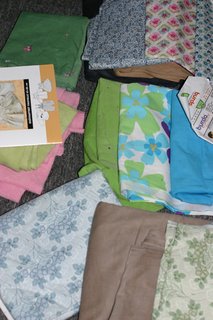 I joined up for the Magazine Swap and received this fantastic parcel from Rebecca in London (who sadly has no blog). 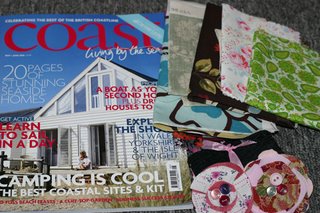 The girls seem to always want to play with the same thing, I think they have reached a compromise here - one drives and one pushes and then they swap. 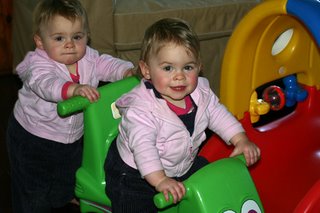 Posted by Kate at 12:44 PM No comments: Links to this post

I finished my other WIP from the weekend and I only had to change the ears, hands, feet, legs, face and horns about 57 times!. 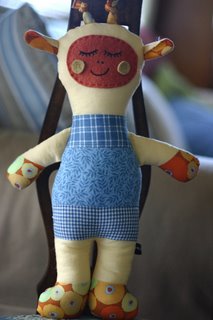 I am very happy with the horns. I think it might also solve my dilemma I had a while ago trying to make beetle and butterfly antennae. They are made like my elephants tails and the ties on the cube. And it's sold already! 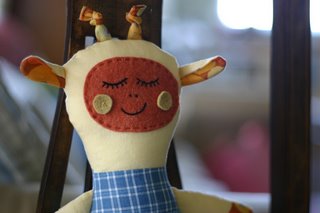 One of my WIPs from yesterday became this: 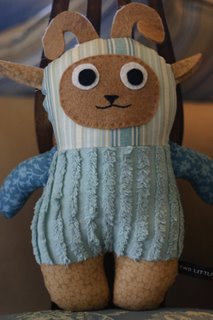 There is a couple of things I will change on my next sheep, but I'm pretty happy with this one. Chris went to the toy library yesterday and got new stuff. Grace will only ride with Milly if she is in charge. She will not sit behind her. Luckily Milly doesn't seem to care. 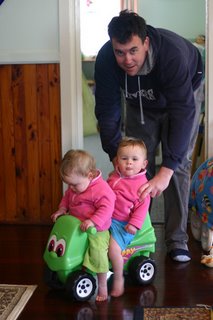 I know it is Work in Progress Friday, but that didn't happen so here it is today. 2 little creatures waiting to be sewn up. I didn't look too hard around the house for unfinished things - I think that would freak me out to see how much there is. 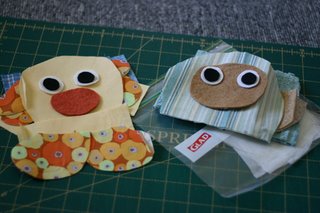 I did finish these glasses cases though. They have been sitting waiting for buttons all week, but now they are finished and for sale here. 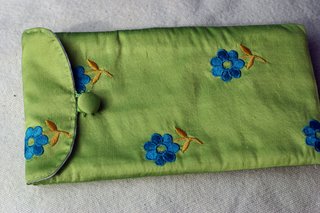 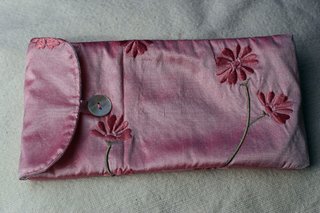 I received the fantastic Kitty,Bunny,Bear Pattern and it is fantastic!
Posted by Kate at 3:17 PM No comments: Links to this post