The girls sleeping is improving. I was going to say it was really great until this morning. Well it is a lot better then it was. We have had a few nights where we haven't had to get up to them at all. It is kind of a shock to the system to be getting a full nights sleep, but I think I can get used to it again!
We had a lovely afternoon yesterday. I thought I'd better teach them to dance to bad 80s music before Jane's wedding. Chris doesn't allow any Abba in the house which is a bit of a shame. Might have to sneak some in. I think Grace and Amelia would love it. I haven't any pictures of them dancing, but here are a couple before they were weighed the other day. Grace is now 7.72kg and Amelia is 7.4kg. They have such a fixation with labels. On their own clothes or each others. They have to pull and look at them. I don't think this is going to be such a great thing in a few years time.
No other exciting pictures this week - just trying to prepare for next week when I have to make something for me and a top for Mum for Jane and Ian's wedding - and there's only 2 weeks to go - Yikes!
Amelia is on the left and Grace is on the right trying to rip her hood off. 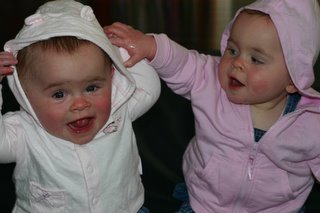 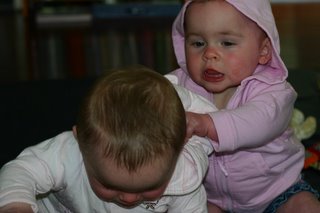 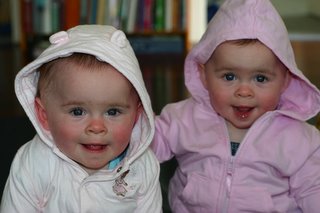