A few more hats while I had the pattern out.﻿ 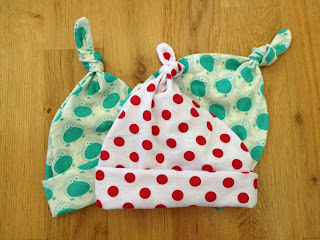 This cardigan has been finished for a little while, but I only got around to blocking it today. To be honest I would have happily frogged it and never thought of it again, but I made it for Grace and she loves it so it was her call. The pattern is Pistache, a free one or ravelry. I have definitely learnt my lesson about trying things on as I knit. It is top down so it wasn't hard to try it on Grace as I went, but I got lazy and just kept knitting. The sleeves and width are huge, not just a little big, but huge. Luckily I did check the length as I knit as if I followed the pattern it would have been down to her knees. It became a chore to knit and I really did not enjoy it at all. 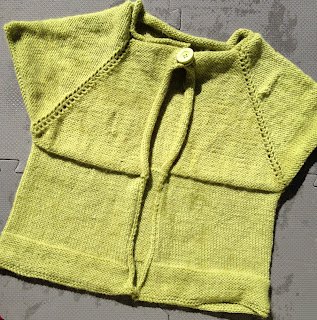 As soon as it was finished I cast on a little Whirligig Shrug in some Debbie Bliss Cashmerino DK. It has immediately made me love knitting again. 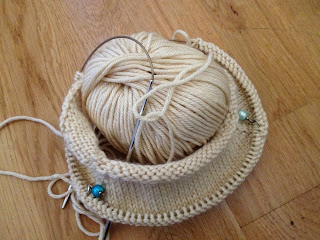 I found this great tutorial for a baby hat today. You need only a little bit of stretchy cotton fabric and about 5 minutes to make one. My kind of sewing at the moment!﻿ 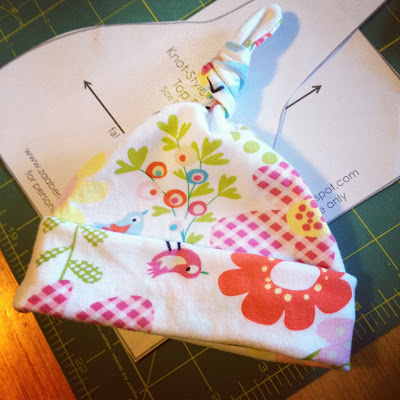 I am always on the look out for good quilt backings at good prices. I had some really good luck on Thursday at Textile Traders. The quilt fabric section of Textile Traders can be a bit hit and miss. Sometimes they get great shipments of fabric in and a few years ago they had lots of Amy Butler and other designer fabric. I hadn't found anything great for a while, but I loved these for quilt backs the other day. The added bonus was it was buy 2 get a metre free. These three are all from Anthology Fabrics which I had not come across before. I also found odd random bolts from Freespririt, Michael Miller, Kaufman and Moda.﻿ 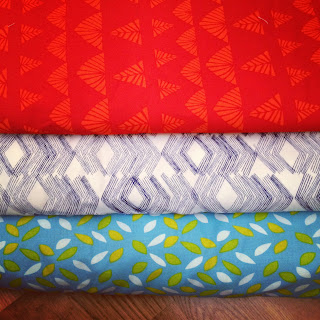 My clever Dad came for a visit this week and he turned up with this great boot rack he had made mostly from recycled bits and pieces. It fits perfectly near the front door. The girls love it so hopefully they will keep putting their boots on it and not in the doorway. 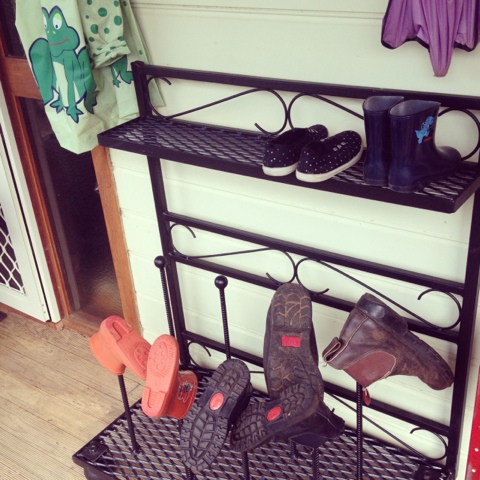 My free motion quilting experiment quilt is finished. This was great fun to do and I learnt a lot.
It was my first time quilting with Aurifil and I am a convert! It took only a little adjustment on my machine - I had to tighten the tension a little bit - and then it sewed perfectly. Those reels of thread do go a long way, the quilt is quite heavily quilted and I estimate I used less than half a reel. I will definitely be using for all my quilting from now on and I will use it when I piece my next quilt. 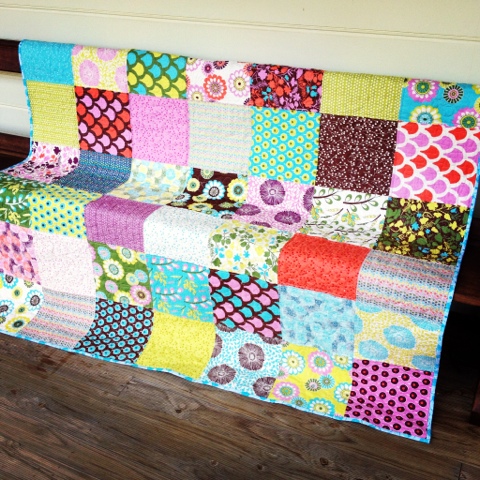 The Elephant in the Room

That is how I fell at the moment, like an enormous elephant. I am 34 weeks now, and have hit that stage where I need to bribe my children to put my shoes on and would just like to lie on the couch and eat dark chocolate mint tim tams in between having naps. No such luck with three other children to look after and some sewing deadlines coming up. Which really is a good thing. I need things to focus on or I end up feeling pretty anxious.
I am not one of those calm people who deal with issues as they come up (luckily I married one of these people). No I overthink everything until I assume every problem that can happen will happen. I was so anxious when I was pregnant with the twins that we didn't buy anything for them until they were born and then I had to send Chris out to buy a pram and carseats and nothing is different this time, especially after last year where I had a very very unexpected pregnancy. (Sometimes vasectomies just do not work. At all.) And then a miscarriage and all the sadness that goes with it.
So now I am trying to keep busy, trying not to overthink everything and trying to focus on other things that need doing around here. 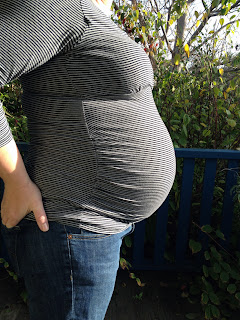 I am nearly at the end of my free motion quilting experiments, just a couple of squares to go. This was my favourite one from yesterday, big and little spirals. The pattern is in Modern Quilting Designs by Bethany Pease.﻿ 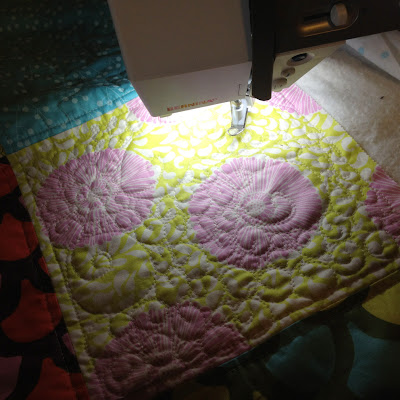 I took some pictures of the back as it was hard to get clear ones of the quilting from the right side. I am definitely inspired now to finish some quilts and get to quilting them. 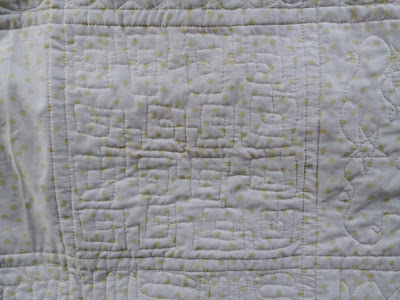 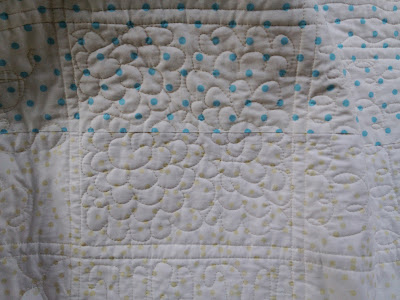 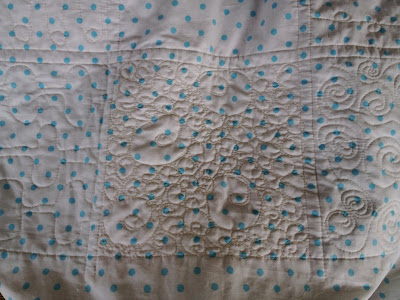 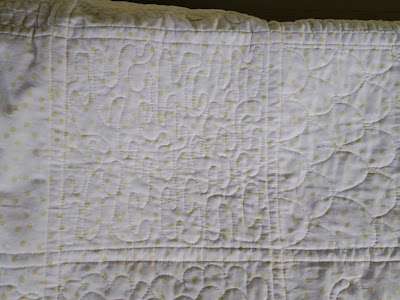 I came across some patterns that were headed to the tip yesterday. I may have squealed with glee. I was restrained and only took these 4 classic children's patterns. 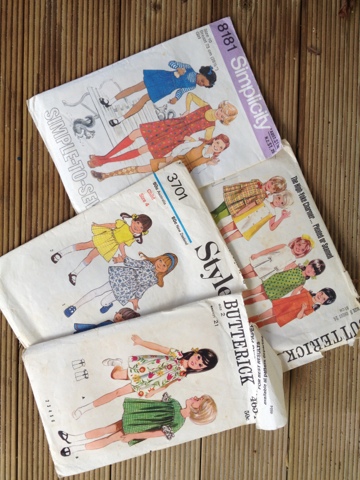 I have slowly been quilting each square differently. Some things are working, some things aren't, but I am discovering what type of shapes I like quilting and which ones do not come naturally for me. I'm also discovering that I love some patterns that I never thought were my thing. Lastly today I have discovered that taking photos of quilting is very very tricky, so apologies for the photos, I'm going back to the sewing machine. 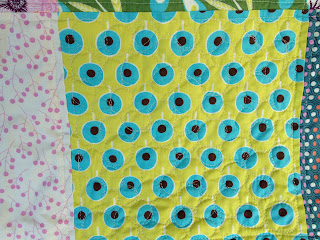 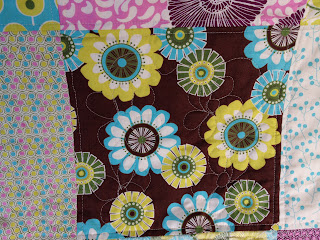 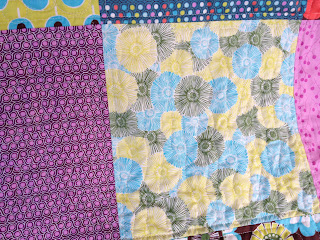 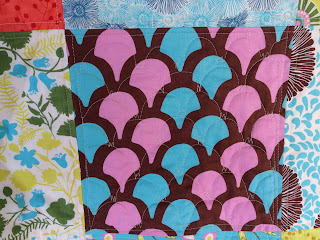 I think I am going to free motion quilt a different pattern in each block. To make this easier I quilted 1/4 inch from each seam to stabilise I could then remove all the safety pins so I don't have to worry about them and can focus just on the quilting.﻿ 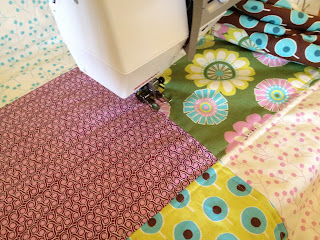 My first Oliver & S Ice Cream Dress. It has only taken a couple of years to buy the pattern and get around to making one. I made the 12-18m size for a present. It looks huge at the moment, but luckily children don't shrink and it should fit for the second half of next summer.
There is not much to say about this pattern that hasn't been said before. If you want a good summary of it see the Sew-a-Long from a couple of years ago. As always with Oliver & S patterns I made it exactly as the pattern said to and noted little changes I would make next time. Nothing huge, I just have preferred ways of doing some things.
I bought the bigger size as well as my girls love to wear smocks and dresses over shirts and leggings so I think this will be perfect for them. 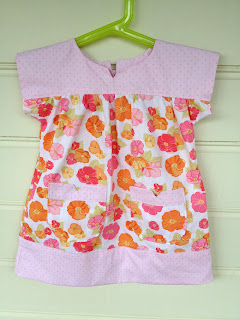 The good thing about using squares for a quilt top is it was finished in no time. Now to find some fabric for the backing from the stash. 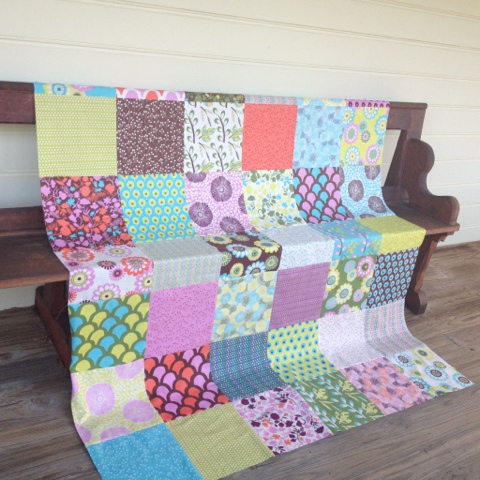 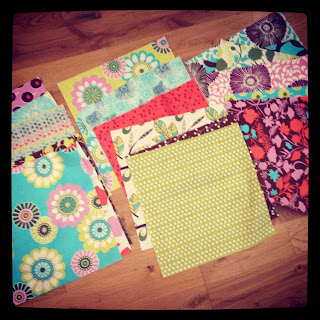 Rows.
The Simplest of Quilts. 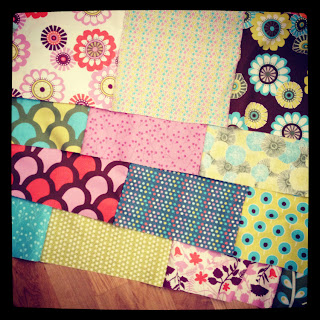 To practise some free motion quilting. 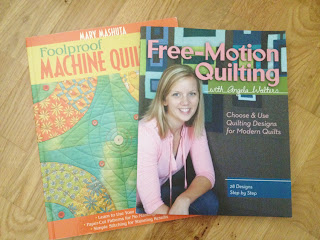 I have only read good things on blogs about Aurifil thread so I searched ebay and found a good deal and bought a box of neutrals.﻿ 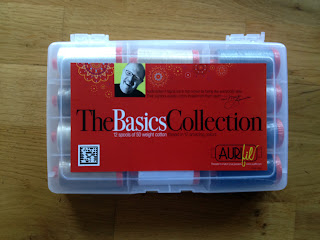 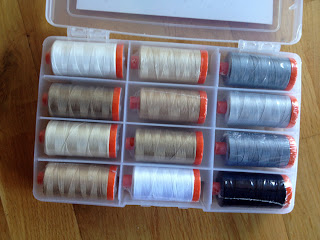 Am I the only person who hasn't made an Oliver and S Ice Cream Dress? I bought a couple of patterns in there recent sale. I need a present for a little girl so I am giving it a go. 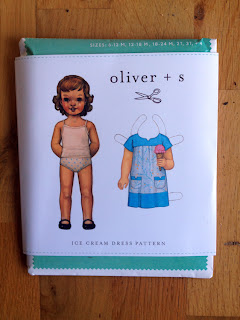